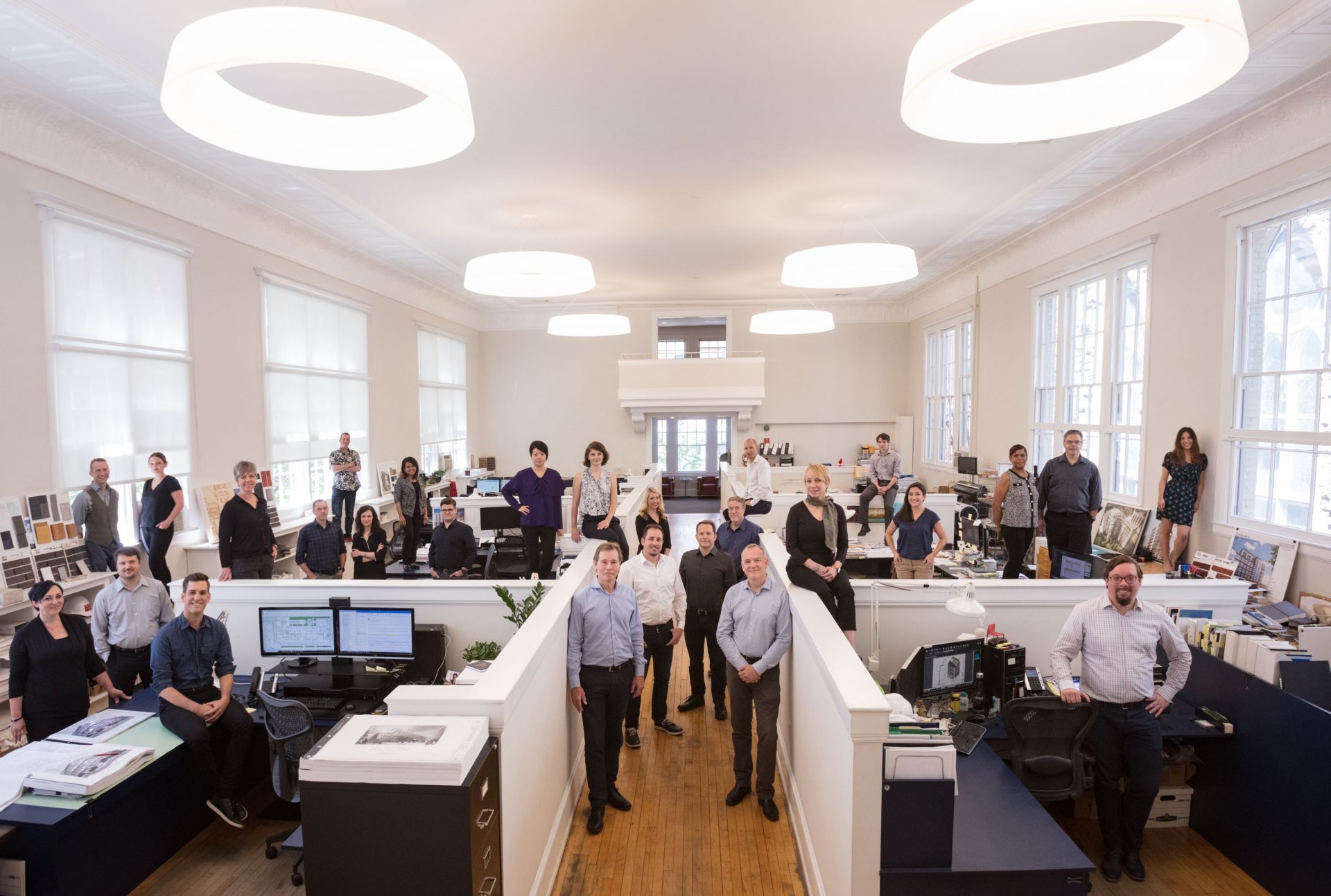 Eric Colbert oversees the staff of his architectural firm, Eric Colbert & Associates, in more than the usual sense of the word. From his office in a loft above what once was the gymnasium of a parochial girls’ school in the District, Colbert can step a few feet to a balcony and look upon his architects at work on the floor below.

“I can give speeches to them from here,” he says with a grin that suggests it rarely if ever happens.

For his staff, the former gym provides two rare amenities: a spacious work area, not only horizontally but vertically, and an abundance of natural light. Huge multipane windows on opposite sides stretch nearly to the ceiling, a full 18 feet from the floor. On one side the windows look out on the stone wall and stained-glass windows of the church next door.
It’s particularly attractive in the evening, when the lights inside the church illuminate the windows, Colbert says.
It wasn’t this way six years ago when he leased the 95-year-old building on the eastern edge of Chinatown. The previous occupant, the federal government’s General Accounting Office, had installed a suspended ceiling and chopped the area into small offices with full partitions.

Colbert decided to gut the entire space and restore its original character as much as possible. When the suspended ceiling came down, he was surprised to find the original pressed-tin ceiling in place.

It had been damaged by the installation of air-conditioning ducts, but Colbert was able to preserve the perimeter and conceal the ducts above a new section of ceiling.

He also stripped the floor of layers of asbestos tile and carpeting to reveal the original hardwood gym floor.
Colbert retained a raised stage at one end of the gym but screened off the curtain opening and added a striking piece of art from his own collection of contemporary works by local artists. The painting, by Tim Nakashima, is on sliding panels that can be pulled back to reveal another Nakashima piece.

To separate his architects’ work stations, Colbert specified shoulder-high wooden partitions with moldings and other details that emulate the original woodwork elsewhere. The tops of the partitions align with the window sills — another reference to the original structure.

“We work in teams,” Colbert says, “so it’s a good idea for our people to be able to communicate and to hear what’s going on elsewhere. When they stand up they can see the other folks, but sitting down they have privacy.”

When the work stations were designed, drafting boards and apparatus were included as a matter or course. Today, however, they are just another surface for spreading out drawings, because the firm has switched completely to computer design.
All except Colbert himself. He doesn’t even have a computer in his office.

“Isn’t that strange?” he asks. “I’m the only person here who draws by hand.”

Colbert moved his company to the building from his firm’s former quarters in an industrial building near Catholic University. The old gym’s charm was not the only thing that attracted him to the site.

The location on Fifth Street NW between G and H streets is within walking distance of the D.C. government offices where Colbert and his staff must attend frequent hearings and get approvals for their projects.

The area also has experienced a recent surge in residential construction and other development close to the building. Al-though Colbert doesn’t claim to have anticipated that activity, he is in an ideal location to capitalize on it.
“We’ve been able to do a lot of projects just a block or two from our office,” he says, “and that’s very efficient.”
One of his projects, in fact, is directly across the street: a 12-story apartment building that is expected to get under construction this summer.

The firm also has five projects under way in the Logan Circle-Dupont Circle area, plus several more in other parts of the District.

“Five or six years ago,” Colbert says, “our work was almost all renovation, but now it’s tilted more to new construction, which is a significant change. Because of the rising rents and condo prices, it has finally become financially feasible to do new residential construction in the District. This is an exciting time for us.”